"Let's meet somewhere in the middle", said Dan clearly missing his dear old mum (and some time off work) after four long months. And to be honest I was looking forward to some quality time with my eldest, not to mention a bit of r & r somewhere hotter than Essex.

That was where the problems began. Donning a burka and having to convince everyone that I was in fact “his mother” so as not to get us both beheaded, was not a prospect I relished, so Saudi (Dan’s current workplace) was out. Even Bahrain, where he was living and commuting from, didn’t really appeal &#8211; too “ex-pat” and not enough “culture” for my liking, although it offered plenty of “schmoozing” and “boozing” by all accounts.

Dan’s idea of meeting “somewhere in the middle” turned out to be Sri Lanka or Kerala which he proudly informed me were “only a cheap &pound;200 flight away”. For him, maybe, but a 12 hour flight and &pound;700 plus for me! Europe was “too cold’ for his exacting standards, demanding temperatures at least in the “30s”. My skills and patience as a travel agent were sorely tested and Dan turned out to be “the client from hell”. Hell - actually worth considering …I had heard that Satan is offering free nights at the moment and the temperature would be close to Dan’s requirements!

Anyway, I felt that I really needed a holiday by the time we settled on Egypt. Thinking I was being diplomatic by suggesting a week at the Red Sea (diving and sunbathing for Dan) followed by a few days in Luxor (culture for me), I was then presented with the task of costing up and arranging all our flights. This was no mean feat when Dan was flying from Bahrain to Egypt but then wanted to return to London with me, then had to get up to Edinburgh for the weekend for a wedding &#8211; returning to Saudi the following week. Phileas Fogg would have been challenged! Ignoring Dan’s added requirements that we “only use a decent airline where he could use his air miles”, hotels included in his loyalty card portfolio, and that the total cost should be kept within his very conservative budget &#8211; oh &#8211; and “don’t forget to book the diving”… we came very close to continuing our relationship via Skype.

So after my final itinerary was “approved”, I found myself starting to look forward to our little adventure.

I must say that I didn’t feel very adventurous at all, squashed on my Thomas Cook Airways flight from Gatwick to Hurghada with the package tour hordes. Screaming kids and suburban couples heading off for their fortnight of sun, sand, sea and salmonella, were not my favourite travel companions, but I did admire their bravery in their choice of destination. Obviously the chance of some half decent weather at unbeatable prices was enough to take their minds off the perceived security risks of visiting one of the most volatile areas in the world.

Having done my homework, I had pre-arranged a taxi transfer along with “visa assistance”, which meant there was a nice man waiting for me in arrivals with a sign bearing my name. He whisked me to the front of the Thomas Cook queue and smoothly circumvented the general melee of people trying to pay US25 to a man for the honour plastering a huge stamp over an entire page of their passports. His name was Mohammed (of course) and he turned out to have quite a sense of humour. Especially when he dropped me off at the “wrong” Hilton!

I’m guessing it might have been his brother or uncle who then kindly picked me up and transported me all the way across the other side of town to the “right” Hilton, after passing several armed checkpoints and having the car swept for bombs on entering the hotel!

I was finally re-united with my lovely son, but the howling wind outside drowned out our greetings as we struggled to close the patio door. The weather had apparently turned very unseasonal &#8211; just our luck and our planned dive trip arranged for the following day was looking less enticing by the minute.

Nervously eating our sumptuous buffet breakfast the next morning, and praying that we wouldn’t be re-living it later on the boat, we looked out at the near horizontal palm trees around the pool. Luckily, the wind seemed to subside slightly as we too subsided at the first dive site, after becoming acquainted with our fellow sub-mariners. Dan had decided to take the “Advanced” Open water course, so was down for 5 dives over 2 days, 4 of which were specialised. As the “specialist skills” didn’t include “apres-dive” drinking, “managing not to pop up to the surface like a champagne cork when your tank becomes empty” and “getting in and out of a wetsuit a size too small on a boat going up and down like a see saw” &#8211; I decided I’d probably fail that particular qualification.

We did see some nice corals, a big clam, some parrot fish and a large sea snake so I was happy. Dan tried out is new underwater camera and I’ve decided that I’m much more photogenic underwater than above it! Maybe I should get all my photos air-brushed a shade of bluey-green.

The following day, I decided to try and find a sun-trap on the boat and read my book, whilst Dan competed his Certificate by trying his hand at a wreck dive, a deep dive, a navigational dive and a photographic dive. So now he can find his way to The Titanic AND take some nice souvenir snaps, should the occasion (or the ship come to that) ever arise.

I must admit, that by this time, I was looking forward to a rest day by the pool, and we made ourselves comfortable in the large double cabanas, having bravely fought off the advancing Red Army using only our bags, towels and sense of resolve. It used to be the Germans and the British who battled over the sunbeds, but we have both been usurped by the Russians who seem to have invaded large parts of the Red Sea (they probably like the sound of it). In fact, they are fast becoming the new “holiday yobs” of Europe, putting us and the Krauts in the shade (quite literally). Those all-inclusive all-you-can-eat meals must seem incredible when you’re used to queuing 2 days for half a sausage and a stale loaf of bread, and many of the guests seemed to be stocking up for several months.

The diving had tired us both out so we didn’t partake of the evening entertainment &#8211; although Dan was almost conscripted by the animation team to be a contestant in the “Mr Hilton Hurghada” competition. I think he would have stood a good chance with his good looks and charm. Plus he would have been the only contestant whose “ambitions” didn’t include invading the Ukraine or getting completely legless on cheap vodka by the end of the evening. We managed to defect to the safety of our room to get ready for the next stage of our adventure. 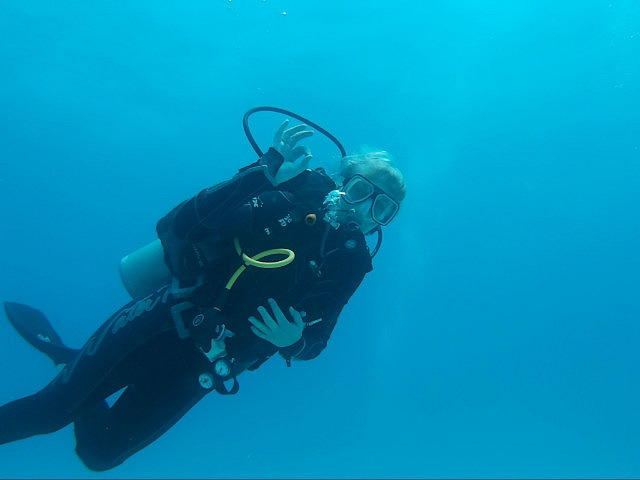 Where are all the fish??? 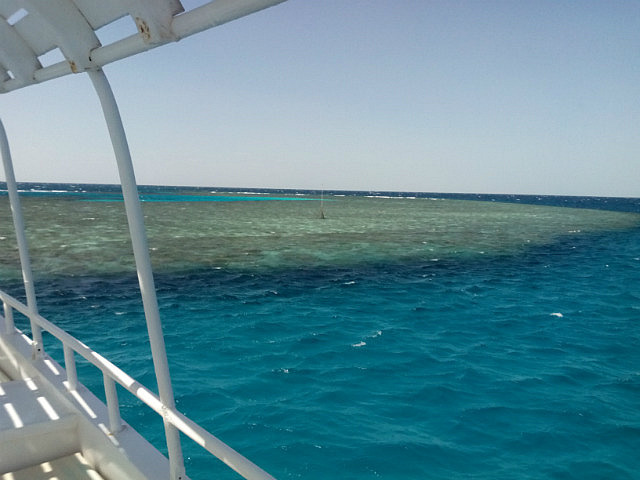 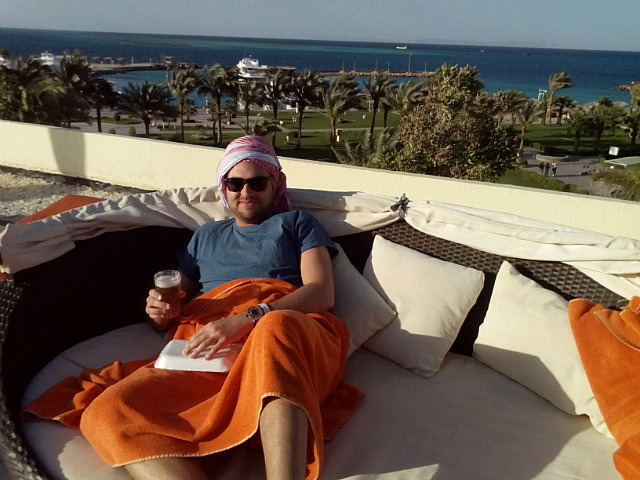 Dan "Sheik-ing it all about" 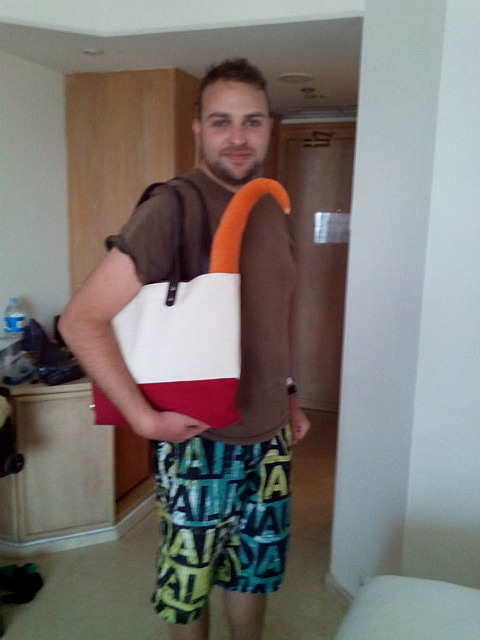 Dan throws in the towel 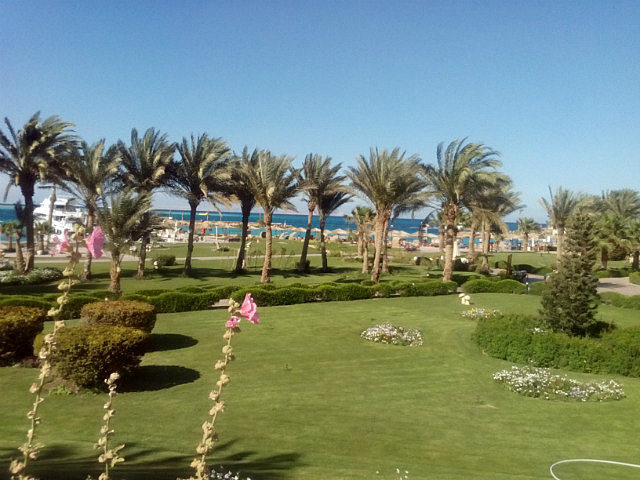 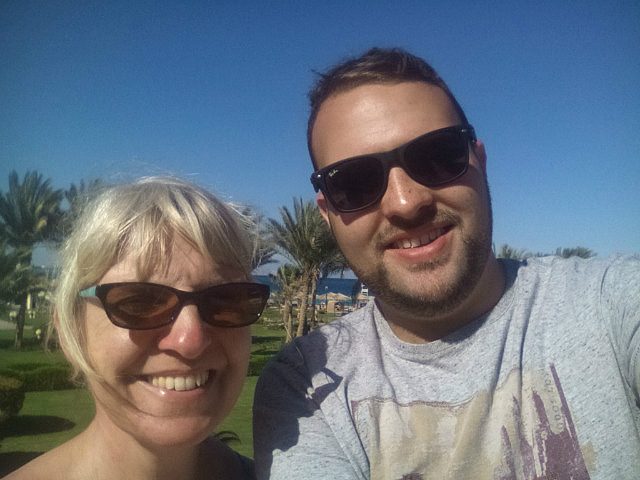 Posted by kathystravels 16:00 Archived in Egypt

This blog requires you to be a logged in member of Travellerspoint to place comments.

If you aren't a member of Travellerspoint yet, you can join for free.